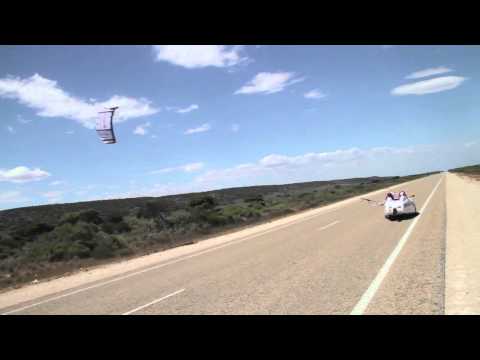 Television host Dirk Gion and engineer Stefan Simmerer recently completed a 5,000 km (3,107 mile) journey across Australia- titled The Wind Explorer,a lightweight electric vehicle powered only by electricity-generating wind turbine and a kite, and broke three world records in the process. To keep the electric Wind Explorer running, it could be recharged overnight using a porable 20-foot wind turbine (it can also be plugged in in the absence of wind). They could also deploy a kite if the breeze was strong enough, and use it to pull the vehicle along, it worked like parasailing.
The 18-day road trip gave way to three world records for the Germans. one for crossing a continent with a wind-powered vehicle for the first time, another for traveling the farthest in a wind-powered car over a 36 hour period, and a final one for the most distance ever covered by a wind-powered land vehicle.