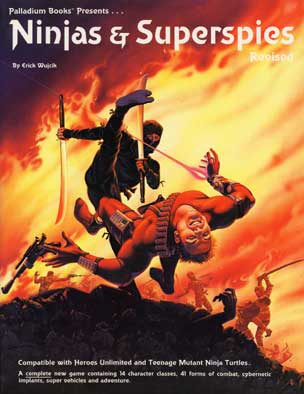 
Ninjas and Superspies is a role-playing game written by Erick Wujcik and published in 1988 by Palladium Books. The game is designed around games of espionage and martial arts action in the modern world, similar to movies such as the James Bond series or Chinese martial arts films. To that end, the game contains game rules for martial arts and mystic powers, alongside rules for playing spies and superspies with gadgets, cybernetics and other high-tech toys. Mystic China, the game’s only published supplement, adds character classes, martial arts, and campaign material focused on Chinese traditional culture (Feng shui geomancers, Taoist priests, etc.)

Characters in Ninjas and Superspies can take several forms. They may be members of a martial arts dojo, operatives for a government or private intelligence agency, soldiers involved in counter-intelligence, or even private eyes, depending on the selection of Occupation Character Class (O.C.C.). Each O.C.C. provides a base age, which is modified by whatever combat training a character has and, in some cases, how long they have spent in prison. Most characters are highly skilled, with characters from the main book using the skill programs system to determine their skills, which provides a collection of related skills, and those from Mystic China using the O.C.C. skills/Elective skills/Secondary skills method, which allows the selection of skills a la carte. Almost all characters have access to contacts from their backgrounds; martial arts characters may know people from competitions, secret agents may have worked with someone in the past, thief characters may have done time with certain people, etc.

While the game makes use of Palladium’s megaversal system, several unique elements should be mentioned. First is that the combat system in Ninjas and Superspies is far more detailed than in other Palladium games, containing more options for attack and defense, to go along with the large number of martial arts offered. Instead of the standard 4 combat forms offered (“Basic”, “Expert”, “Assassin” and “Martial Arts”), Ninjas and Superspies has more than 40 unique styles, with Mystic China adding additional styles; these styles are somewhat abstracted from real styles of the same names, attempting to maintain the “feel” of an individual style, without necessarily showing every way in which it can be taught. Some martial arts have entirely unique forms of attack or defense, or unique powers, but most draw from the expanded list of standard maneuvers, combining them with martial arts powers to create the individual style.

Ninjas and Superspies also incorporates the idea of Chi, which is presented as a life-energy force which is present in the world and can be directed by trained individuals. This concept is interpreted several times into other Palladium games, often as different aspects of Palladium’s own metaphysical energies, but with less success than it is in Ninjas and Superspies, where it is considered a separate energy of its own. Other aspects of Chinese mysticism are considered, especially in Mystic China.