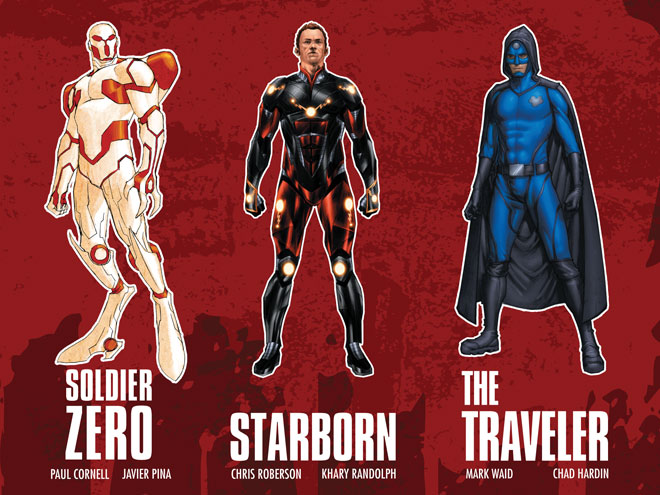 
Soldier Zero
Soldier Zero, by writer Paul Cornell (Doctor Who, DC Comics) with art by Javier Pina, is first in the chute, with an October launch date. The wheelchair-bound teacher who becomes Soldier Zero is “a chap who is in a wheelchair who gets the chance, bonded with this alien soldier, to be out of the chair doing extraordinary, superheroic stuff,” Cornell said.
“Rather like Peter Parker is a hero who is limited only by his environment, and escapes as Spider-Man, [Soldier Zero] is limited only by his environment,” he said.
The Traveler
Written by Waid with art by Amazing Spider-Man artist Chad Hardin, The Traveler deals with a time-jumper who tangles with a crew of superpowered assassins from the future known as the Split-Second Men. The hero doesn’t play by the standard rules of time-travel stories, Waid said.
“This guy doesn’t care whether he messes with history or not,” he said. “As a matter of fact, this is the kind of guy who, if he were standing in Dealey Plaza in 1963, he wouldn’t let Kennedy be killed…. What you see is what are the repercussions if you’re willing to actually tamper in time.”
“We should have called it The Tamperer,” Lee interjected, laughing.
Starborn
Starborn, written by written by I, Zombie scribe Chris Roberson with art by Khary Randolph, hits comic shops in December. It’s about a regular Earth guy who discovers he’s heir to an extraterrestrial empire.
“What this guy discovers,” Roberson said, “is, as he goes out into space trying to basically liberate these oppressed humans in this alien culture, that his dad, who he’s taking the reins from, who died before he was born, was the bad guy. And the guys he’s fighting are the freedom fighters who overthrew his dad.”