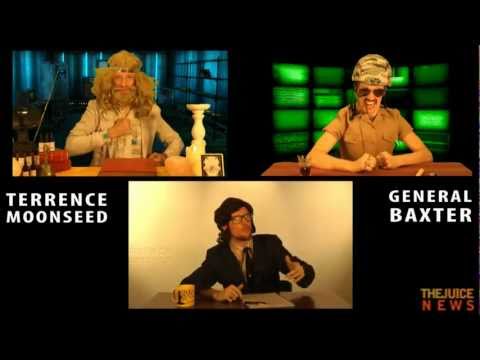 Hello, and welcome to the show
This is rap news with that Juice it’s essential to know
And while churnalists claim to be first with the news
We prefer to learn, discern, and turn up first with the truth

So, without further ado, we’re starting by charting
The alleged last gasp of Osama Bin Laden
We ask the tough question most pundits are dodging
What happened in Abbottabad on that morning?

And joining us, regular guests on the news feed

The Pentagon’s General Baxter – and Terrence Moonseed
Gentlemen, welcome. We’ll begin with you, General
How’s the general atmosphere there at the Pentagon?

—Incredible, this is just an enviable victory
The USA has made an indelible entry in history
A decade since nine eleven we found bin Laden
And got justice for the 3000 Americans that died then

His crime and infamy have been erased and healed
Framed and sealed thanks to the bravery of the US Navy Seals
Way to kill! —Tell us how it went down, the actual sequence.
—SEAL team six hit the compound, it was battle stations

They found Osama armed with a Muslamic raygun
Shot him in the face and … What’s that, no raygun?
Uh, well, then he used his wife as a human shield and

… What , that didn’t happen either?

Ok, well then they shot him and took pic…
… Took no pictures… And buried him according to Muslamic scriptures
In the … Sea?! Yes in the …sea.
Uh, and the President was or was not watching the live feed

—An extraterritorial hit?! —The world’s in our grip
Now our jurisdiction extends over all of it
So who’s next for Shock and Awesome judgement?
Amadenijibad? Al Akawi? Assange: we’re coming!

—Was Osama worth it? ¬¬¬—Yeah, he was worth it
We only lost 6000 more Americans to murk him
But I didn’t like how we treated his corpse; he’s no hero
I’d a hanged drawn and quartered him at Ground Zero

Where the 19 hijackers… —Lies, Baxter! there were no hijackers
It was a demolition, a Reichstag on
The twin towers by the twin powers of Bush and Cheney;
bin Laden wasn’t in charge of mushing planes in

In fact the planes didn’t even exist
They were blue beam holograms projected to increase the mist
Plead the fifth, but thermite dust sits on the curb
And Building Seven is evidence that it’s so absurd

—You Internet nerd, Osama did it! —Distrust every word!
—This is our finest hour, justice has been served
—’Justice’, General, that’s an interesting word to choose
—We’re a Nation of Laws, what other word would you use?

—Assassination, slaughter? —He’s a legitimate military target, a murderer
—But what about the precedent set at Nuremberg?

—Nurem-what? After the holocaust and six million dead
America stayed the hand of vengeance and, instead,

Nazi leaders were rounded up and… —Tortured?
—uh No… —Water boarded? —Hired by NASA —No! brought to Court to
Be tried for crimes against humanity,
Then executed —What a tragedy

Please, eurofag dont history lesson me!
Dont you get it? The true sign of a supremacy
Is who gets to decide at each given minute
When the rule of law is applied and when it’s suspended

And end up at the bottom of the ocean like bin Laden
—Pfft, Osama isn’t dead or if he is, he died in two thousand
This thing’s rotten! No death certificate or public evidence, man
He’s prolly kicking back on a island on a CIA pension plan

—Watch it, hippy, or get double tapped like Geronimo
—That reminds me: why this codename, Geronimo?
—Geronimo!? that’s Osama’s code name? Let the truth be known
This reeks of the Masons and the Skull and Bones

It’s a secret society of elite Yale students
who stole the skull of the apache chief and they use it
In occult dark rituals like pagan Druids
Worshipping Satan, Lucifer, Cain and Judas

The truth is they’re the ones who owned Osama
And got the pharaoh plasma to clone Obama
They’re ruthless, they planned this end game
To coincide with the May Day pagan festival of Beltane

A fertility ritual with blood sacrifice
And Adolph Hitler’s suicide dates match precise
That’s a device to pledge and bow
To the true rulers of the earth, and renew the wedding vows

That’s why Obama HAARPooned Japan creating the waves to hit ‘em and
Prince Reptilian was married to Satan in the form of Kate Middleton
I ain’t kidding with you when I’m yelling the truth the illuminati’s on the throne
And that’s the real reason they call Osama ‘Geronimo’!

—It’s a perfectly good code name, what’s wrong with you?
—I see many native Americans consider it dishonourable

To have their hero, ancestor and leader
Associated with terrorism and Al Qaeda

It all seems like an appalling error
—It wasn’t an error; this right here is the war on terror
And it’s a continuation of the nineteenth century
Campaign we had to wage to liberate the territory

Of the united states from the redskin savages
Who also hid in caves and kept on attacking us
Because they hated our civilised ways,
Our Christianity, whiteness and slaves

—Weren’t the Apache defending their lands from the invasion of whites?
—They started it, Bob, get your history right
Same with Al Qaeda, we didn’t pick this fight
So, you see, the Geronimo analogy is tight

—Alright, thank you both for your …interesting views
Little wonder there’s such confusion in the news
When we can scarcely agree on historical narratives
Is there any mystery that we live in diverging realities?

But there’s a rival tide, an equal and opposite turn
A yearning to read between official lines that have blurred
I’m reassured by the many who were plainly disturbed
And who questioned the way in which ‘justice was served’

If it was served, it can be served to us just the same

So what brand of justice do we want done in our name?
leaving you now with that thought in your mind
Robert Foster for JuiceMedia, proud to ignore deadlines[/more] 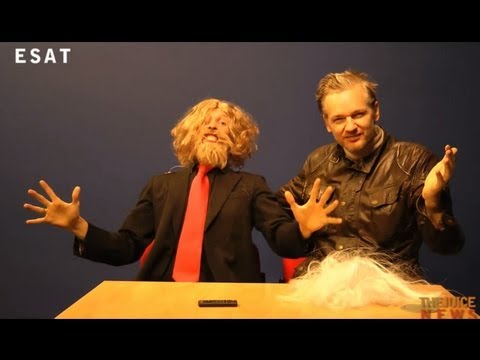 Good evening, Rap News is back this
week on the back of yet another massive leaking
which lays bare and paints a clear picture of the actual dealings
and reality of operation Iraqi freedom

It`s been Seven years of that illegal
invasion which has claimed A million iraqi people
the leaping toll of casualties and
images from abu ghraib of rape, kidnappings, beatings

As hawks now have their eyes fixed on Iran
We analyse the man behind that original plan
and these very events presenting our first guest
Donald Rumsfeld, Secretary of Offense

Mr Rumsfeld, hi there, welcome down to the station
in light of this revelation How do you feel now about the invasion?
This isn`t new information and it was liberation
Iraqis are now free to play soccer and playstation

what about abu ghraib, and the allegations
Not just of humiliation, but savage raping
My actual statement is the military
In the killing scene is at liberty to blow off a little steam

if you remember the Iraqis had WMD
doesn’t it trouble you that you failed find any?
well steady, I never said Iraq had weapons you know
yes you did! You said that exact fact a second ago

I dunno, intelligence was distorted and cynical
scorned and ridiculed, support for your war was minimal
won’t history judge you as a war criminal?
We’ll write the books, they won’t be at all critical

This interview’s over, general
Take him away he`s pitiful
With pleasure, now to shut Rap News down forever

Now my guest is a true American hero
Donald, Bill, good to finally get on a real show
So how`s the united states of iraq in the last quarter
Well, our crack forces hand in hand with blackwater

Yeah, by like a million at least since two thousand and three
That`s a million more people, who are now blissfully in peace
And wikileaks
Bill please don`t get me started on those frickin cybergeeks

What gets me is these hippies keep
Criticising the military
when the military keeps em living free
From tyrrany, terrorists, and nuclear bomb threats
They seem to have a military industrial complex

But now a word from our sponsor, we’ll be back pretty fast
With the former secretary of kickin ass

Why see shades of gray
why be a loner?
try another Soma
Soma™
Life’s good, shut up!™

Alright we`re back in the no spine zone
News World Order live in your mobile home
So , rummy, Bradley Manning..
Bradley Manning, man I`m glad we grabbed him

we`re gonna Black bag him, tag him, pack that homo away
Let`s see him hack his way out of guantanamo bay
You know what you ought to do?
enhanced interrogation… wait there`s a problem with my autocue

What`s that? `Sorry Bill we have to interrupt?`
it just says`you`ve been wanked` – stupid thing is stuck
Wank you say? I remember that from the Nasa days,
Bill, you`ve been hacked I`m afraid

Hacked? Fuck it, we`ll do it live
Fucking thing sucks, We`ll do it live
Wank only one man would use slang this way
it has to be Julian Assange – g`day

gentlemen, hey?
I couldn`t help noticing you mentioned my name
Assange, how the hell`d you get in the frame?
A simple hack, you left the back door open again
We’ll hack off your hands, leave you rollng in pain

I thought we controlled this whole station
Our signal’s being jammed from an undisclosed location
You telling me you can’t even get that fag?

Bill O`reilly, for dangerous defiance of reason
And betrayal of journalism, I now try you for treason
Shut up you just leak crap! You`re dead!
I think you`ll find it`s you that leaks crap and is dead

What`s happening to his head?
it`s leaking every single bit of crap he`s ever said
we`ll get you Assange, and your little site too
but a thousand other sites will creep up behind you

I’m an avalanche! they didn’t stand a chance
Against my battle plans, Robert, here have your channel back
apologies for the apalling violence
Julian? you look different. These days I can afford a stylist

Now The enemies of truth will cower
Before the avenging Assangel, and my brutal power
With the hammer of Tor, I will leap forth
Crush the imposters – I couldn’t agree more

Ah! What’s going on here? I think you know
Is that Julian Assange, yes it is, Hello
Pfft Look at his hair, everyone knows it’s white
This isn’t Assange, it’s some loser with low lights

Now get outta here you fake Assange it’s
Time for me to leak the true fate of Atlantis
No, it’s time to find out who the heck this is
Terrence Moonseed! Gah, you pesky kids

Well, I think it’s time to end this session
It seems, journalism’s become a dangerous profession
Risking ostracism extradition
To provide a clear picture of the world we live in

but without truth, history will certainly repeat
The same wars, in this time of universal deceit,
Telling the truth has become a revolutionary act
So I salute those who disclose the necessary facts.