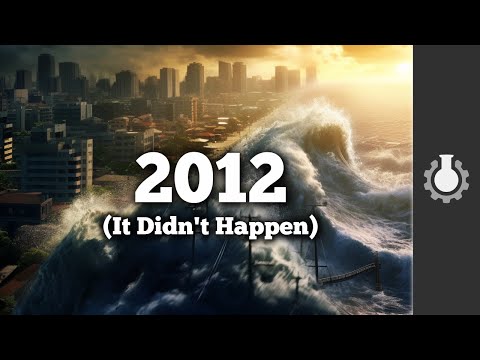 History has a long and rich tradition of apocalyptic predictions – all of which were wrong – yet some people still think that this time ’round in 2012 is the real deal.

Mayan calendars not only recorded the days and years, but also longer cycles of about 5 Millennia.

Modern new-agey people decided that the wise Mayans stopped making calendars because they knew when the world would end.

And because new agers are happy – though scientifically illiterate – people their vision of 2012 was a great spiritual awakening or world reboot or other hippy-consciousness-expanding nonsense that the Mayans, who spent time puling strings of thorns through peoples’ tongue, probably didn’t have in mind.

To a normal person the thought that: calendar finishes therefore end of the world is an odd conclusion to draw.

After all, the amount of time in the Universe is infinite and the amount of stone is limited. So, at some point the Mayans had to stop carving calendars.

What happened to you guys?

Anyway. After this NASA became so inundated with questions that they had to take time away from their busy robot building, frontier pushing, knowledge expanding, civilization inspiring schedule, to write a webpage explaining that no, a human-sacrificing, stone-age society with neither wheels to pull carts nor glass to make telescopes, didn’t know more about science at the dawn of history than real scientists do today.

But the parade of crazy marched on anyway making wilder and wilder predictions for Earth including:

Geomagnetic Reversal (a process that unfolds on a geologic timescale, not a single day)
A collision with mysterious Planet X (That no astronomers have found)
A local star going supernova (Despite there being no such candidates)
An Alien Invasion (Which is ludicrous on the face of it… or is it?)
And a galactic synchronization beam, whatever the hell that is.

A sane person, at this point, would wonder how the Mayans were able to predict astro-physical anomalies thousands of years in advance and millions of miles away yet didn’t foresee the Spanish coming across the Atlantic.

And that’s because the Mayans never predicted apocalypse. The only people to claim the Mayans knew about the end of the world were distinctly not Mayans.[/more]
Un video divertente sul perchè il 2012 e relativa fine del mondo sono un mucchio di baggianate.