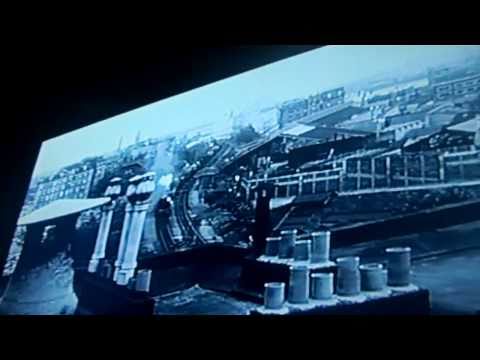 At 7 a.m., Marty McFly’s Rube Goldbergian alarm clock goes off. Suddenly people in scene after scene are awakening to alarms, hearing radios, throwing clocks across rooms, rolling over back to sleep. Marlon Brando puts on cold cream; Willem Dafoe already looks haunted. The young Paul Newman curls up. I hear bells and watched people peeping into their new lovers’ medicine cabinets. At 7:09 a.m., Brando again, staggeringly bloodied and battered, victoriously goes to work at the end of On the Waterfront. Just then, James Bond looks over Pussy Galore; Johnny Cash stakes out a suburban home; a woman and man have morning sex. People soon start catching trains and buses. Coffee rituals begin — scooping beans, boiling water, adding sugar — all over dozens of movies, every single one with a clock in the background. A woman turns from a lover and puts on her bra.

At 7:23 a.m., Tom Hanks, in The Terminal, shaves in an airport bathroom as another man asks, “Ever feel like you’re living in an airport?”. Prisoners start going into prison yards; convicts plan breakouts; someone waits on death row; a woman prepares to go to the gas chamber. At 7:30 a.m. Michael Douglas gets home to a phone message in Fatal Attraction& (it’s Glenn Close who tells him she’ll “call back soon”). Tracy and Hepburn wake up and have breakfast in bed. There’s tooth-brushing, vitamin-taking, curtain-opening. Single dads pack kids off to school, and when the children ask, “Where’s mommy?” the fathers go silent. At 7:48 a.m. a woman says she wants to have “twelve-second sex.” A few minutes later, Woody Allen wakes up with Diane Keaton and says, “I have not slept that long in ages. What time is it?” She says, “7:58 a.m.”

At 8 a.m., more alarms go off; more scenes of the gas chamber; a man says to a woman, “It’s 8:05 a.m. I’m going to fuck you by 10 a.m.” Then Robert Duvall, a.k.a. Lieutenant Kilgore in Apocalypse Now,looks at the carnage all around him, and says, “I love the smell of napalm in the morning.” You’ve heard it a thousand times, but here, when the camera pulls back, you notice that his watch says 8:09 a.m. Alex, the ultraviolent protagonist of A Clockwork Orange, appears as he’s awakened by his feckless mum — and then we get John Travolta and Samuel L. Jackson, covered in blood, having coffee as Quentin Tarantino lectures them about the potential peril of “a Bonnie situation.” At 8:20 a.m. John Candy and Steve Martin wake up in bed together; Candy kisses Martin’s ear. Martin asks Candy where his hands are; Candy says, “Between two pillows.” Martin shrieks, “Those aren’t pillows!” and they both leap out of bed in homosexual panic.

[more]
By 8:35 a.m., we’re seeing traffic jams. At 9 a.m. we get a split second of Jack Woltz, The Godfather’s uncooperative Hollywood movie producer, just an instant before he realizes there’s a horse’s head in his bed. Minutes later, at 9:11 a.m., Marclay gives us a shot of the first World Trade Center on fire on TV, and time seems to freeze. Soon we see kids in school taking tests, businessmen taking meetings, people punching time clocks. At 10 a.m., lines wait for Willy Wonka to open up the Chocolate Factory. This goes on and on. At 10:22 a.m., Molly Ringwald casts The Breakfast Club’s cute boy a glance. At 10:53 a.m., a funny moment: It’s a scene from an old Bible movie, and Marclay has noticed that the actor is wearing a wristwatch.

At 11:38 a.m. Peter Fonda and Dennis Hopper sit atop their Harleys at the edge of the desert, as Fonda throws his watch away. Next Stan Laurel breaks a grandfather clock. At 11:45 a.m., we return to Pulp Fiction for one of the stranger scenes about time in any film: Christopher Walken, as Captain Koons, holds up a watch and tells a young boy, “Five long years, he wore this watch up his ass … I hid this uncomfortable hunk of metal up my ass for two years … And now, little man, I give the watch to you.”

Leonardo DiCaprio wins two tickets and scrambles aboard the Titanic. Then comes noon. Gunfighters walk in deserted towns; Gary Cooper waits for something to happen; Henry Fonda pulls his gun; Charles Bronson challenges outlaws. Suddenly we see Laurence Oliver as Hamlet, at noon in the graveyard delivering his “Alas poor Yorick” speech. A moment later, we see an incredible extended pathos-filled scene of Charles Laughton, wildly clinging to a clanging bell as Quasimodo in The Hunchback of Notre Dame. Dustin Hoffman as Rain Man drones about the time: “It’s 12:21. It’s definitely 12:31.” At 12:45 p.m. someone asks Harpo Marx what time it is and he pulls a huge clock out of his overcoat. At 1:05 p.m. the boy in The Tin Drum screams at the top of his lungs and breaks the face of a clock. [/more]