The light is first refracted entering the surface of the raindrop, reflected off the back of the drop, and again refracted as it leaves the drop. The overall effect is that the incoming light is reflected back over a wide range of angles, with the most intense light at an angle of 40–42°. The angle is independent of the size of the drop, but does depend on its refractive index. Seawater has a higher refractive index than rain water, so the radius of a “rainbow” in sea spray is smaller than a true rainbow. This is visible to the naked eye by a misalignment of these bows.[2] The amount by which light is refracted depends upon its wavelength, and hence its colour. Blue light (shorter wavelength) is refracted at a greater angle than red light, but due to the reflection of light rays from the back of the droplet, the blue light emerges from the droplet at a smaller angle to the original incident white light ray than the red light. You may then think it is strange that the pattern of colours in a rainbow has red on the outside of the arc and blue on the inside. However, when we examine this issue more closely, we realise that if the red light from one droplet is seen by an observer, then the blue light from that droplet will not be seen because it is on a different path from the red light: a path which is not incident with the observer’s eyes. The blue light seen in this rainbow will therefore come from a different droplet, which must be below that whose red light can be observed.
Contrary to popular belief, the light at the back of the raindrop does not undergo total internal reflection, and some light does emerge from the back. However, light coming out the back of the raindrop does not create a rainbow between the observer and the Sun because spectra emitted from the back of the raindrop do not have a maximum of intensity, as the other visible rainbows do, and thus the colours blend together rather than forming a rainbow.
A rainbow does not actually exist at a particular location in the sky. Its apparent position depends on the observer’s location and the position of the Sun. All raindrops refract and reflect the sunlight in the same way, but only the light from some raindrops reaches the observer’s eye. This light is what constitutes the rainbow for that observer. The position of a rainbow in the sky is always in the opposite direction of the Sun with respect to the observer, and the interior is always slightly brighter than the exterior. The bow is centred on the shadow of the observer’s head, or more exactly at the antisolar point (which is below the horizon during the daytime), appearing at an angle of 40–42° to the line between the observer’s head and its shadow. As a result, if the Sun is higher than 42°, then the rainbow is below the horizon and usually cannot be seen as there are not usually sufficient raindrops between the horizon (that is: eye height) and the ground, to contribute. Exceptions occur when the observer is high above the ground, for example in an aeroplane (see above), on top of a mountain, or above a waterfall.
Frequently, a dim secondary rainbow is seen outside the primary bow. Secondary rainbows are caused by a double reflection of sunlight inside the raindrops, and appear at an angle of 50–53°. As a result of the second reflection, the colours of a secondary rainbow are inverted compared to the primary bow, with blue on the outside and red on the inside. The secondary rainbow is fainter than the primary because more light escapes from two reflections compared to one and because the rainbow itself is spread over a greater area of the sky. The dark area of unlit sky lying between the primary and secondary bows is called Alexander’s band, after Alexander of Aphrodisias who first described it. 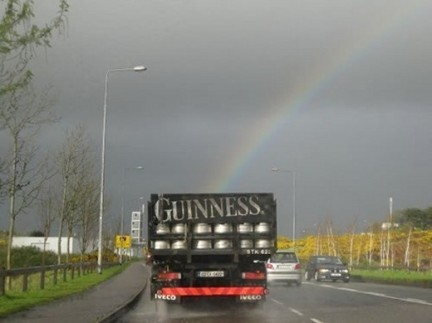