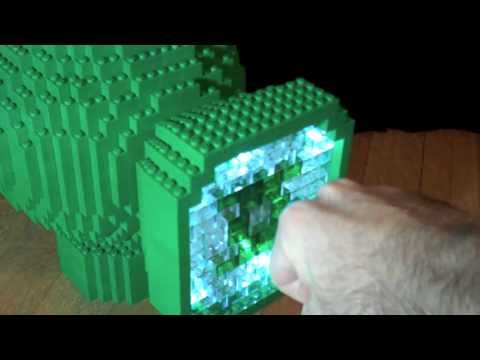 The first stage of this project was to prepare the electronics. The obvious choice was to use an Arduino with an RFID reader in the front of the lantern. With a considerable amount of strife, and a ruined RFID reader, I was able to read an RFID chip with the hardware. The chip was implanted within a Green Lantern ring that had been given away by comic book stores earlier this year.
Once the Arduino was ready, it was time to start building the Lantern itself. The first stage was to build the Lego sphere that made up the main body of the power battery, leaving holes on the sides for the lantern extrusions. A hole was also left in the top to allow the top part of the lantern to open to access the electronics. The arduino was placed in the body, and the RFID read and LED lights were added as the front of the lantern was built out. The power cable was run through the back and the rear was built out with a hole left for the cabl