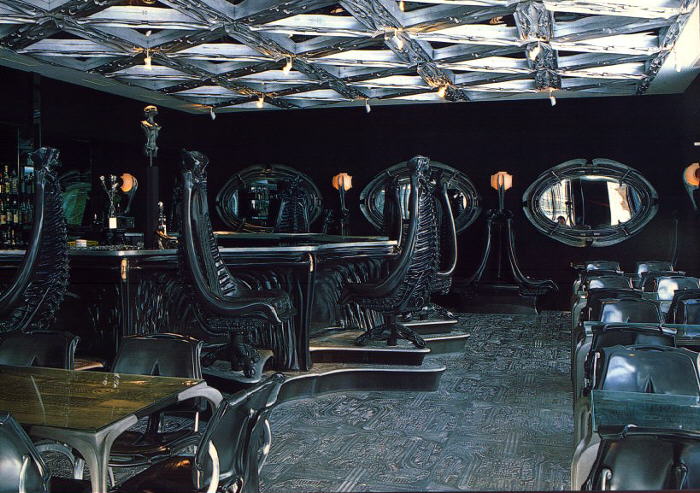 The Giger-Bar which, today, exists in the Swiss city of Chur, was originally planned for New York City. When it became apparent that the budget for the bar envisioned for New York was not going to be enough to allow for the design and construction of the elements which had been planned for it, Giger decided it would be wiser to wait until it could be financed properly.

Fortunately, Thomas Domenig came into Giger’s life at about the same time. In his youth, Giger had attended high-school with his wife. Domenig is the number-one architect of Chur. He built about a third of the city. There were plans for a café in his Kalchbuhl-Center, which was already under construction, and Giger had, evidently, shown up at just the right moment. He was able to convince Domenig to change his plans and back the idea of a bar.

The furniture program for the Giger-Bar was significantly expanded by the new designs for a chair, a glass topped table and the bar itself. The establishment’s door is that of Giger’s armoire design, enlarged by one third. The oval mirrors, the wall lamps and the special coat racks were also designed by Giger and carried out with the aid of Giger’s most important team of technical experts, de Fries, Schedler, Ammann, Vaterlaus, Gruber and Brigitte von Kanel.

It is Giger’s hope that, one day, a Giger-Bar can still be realized in New York City, his favorite amongst all the cities of the world.